GTA 5 game is now online, and developers are preparing to release it on new PS5 and Xbox Series consoles with updated and improved graphics. The announced price of the game, first released back in 2013, terrified the players. 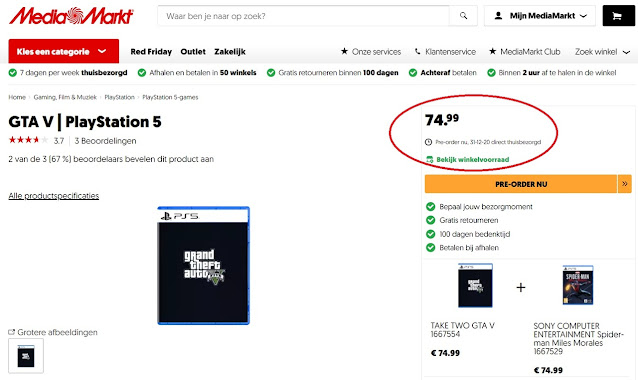 Тhe game page Grand Theft Auto V for the new console PlayStation 5 appeared on the page of the popular retailer MediaMarkt and attracted the attention of users. On the page with the game, GTA 5 with the new graphics also appeared the price of the novelty. According to new information, GTA 5 Price PS5 will be 75 euros and will be equal to the price of a new game Spider-Man: Miles Morales.

Information that the updated version of GTA 5 for users of PlayStation 5 will sell at 75 euros terrified many gamers. Players remembered that the original GTA 5 was released back in 2013 on the PS3 and Xbox 360, and therefore such a high price tag for the game 7 years ago shocked many. However, while the information from the MediaMarkt page may be unofficial, and gamers should wait for official information from Rockstar Games or Sony.

75 euro – price of GTA 5 for the PS5 console. Most likely, the game will have this price tag on Xbox Series X as well. If the information on MediaMarkt is true,  which for some (most, to be honest) people is an incredibly huge cost. It’s not quite clear yet, what kind of “buns” will get the next version of GTA 5, but to try to sell such an old game for such a price is at least rude from Take-Two. If by improvements and extensions we mean some new story missions or, for example, innovations in the gameplay – well, let’s say. But most likely, you and I will have a minimum “facelift” and miserable new content, and this in no way justifies the price tag of 75 euros.

The updated version of GTA 5 for new consoles was officially introduced by Rockstar and is expected to release in 2021. It is not yet known what kind of improvements the project will receive in addition to the new graphics, and whether it will wait for fans and other new content. It is also unclear when to wait for the announcement and release of the new GTA 6.