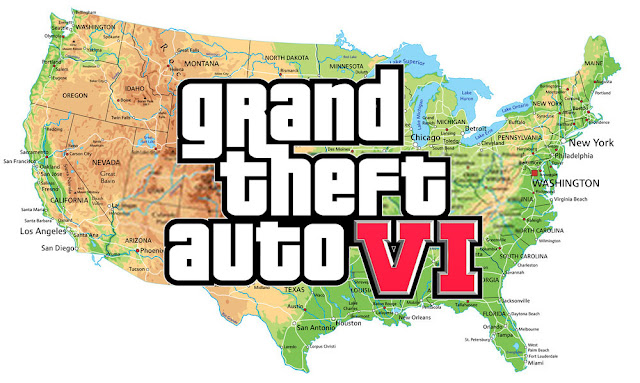 As fans search for any hint of Grand Theft Auto VI news and speculate about what the next GTA game might involve, one thing that draws perhaps the most speculation is the map. What will the GTA 6 map be like? Since we don’t even know what city the game will be set in, there are a lot of possibilities. Many supposed leaks and rumors have emerged about GTA 6 map leak, so let’s take a look.

When fans talk about a potential GTA 6 map, it’s not as simple as giving a quick answer or prediction and leaving it at that. Many different questions go into discussions of the map, due to the nature and scope of the series.
In particular, fans want to know about the location, size, and design. 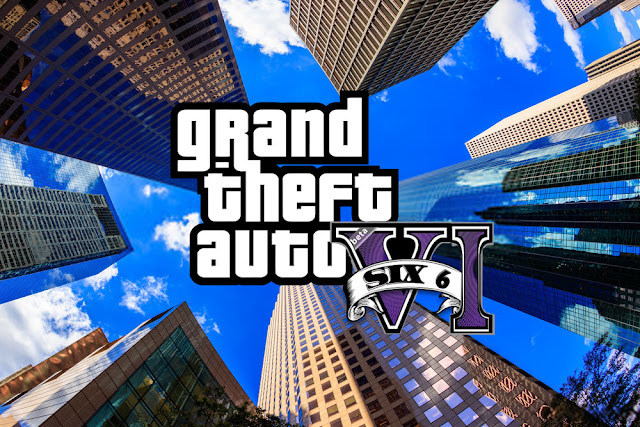 Always a prime topic for speculation, there are numerous theories about where GTA 6 will take place. As we discussed in our article on Houston as a potential GTA 6 setting, the game’s city will determine much more than just the atmosphere and the sort of activities available.
Location can determine the map size, as well as its layout. A compact, the crowded city will feature a denser map, while a sprawling area will focus more on wide expanses. Therefore, map speculation is tied closely to the city. Once you know the city, then you can determine what areas might be used or adapted for the GTA format. Until the actual setting is known, more detailed speculation will need to wait.

Map size, however, is a question that can be discussed in broad terms even while the setting is unknown. While the city will definitely play a role, what Rockstar chooses to do with that city will determine the map size. Some open-world games favor massive maps with tons of ground to cover, while others lean toward smaller, denser maps. Each approach has its fans, and GTA has traditionally favored larger areas.
For the GTA 6 map, Rockstar is unlikely to opt for a smaller map than it’s used in the past. A map of the size of GTA 5’s or larger is most probable.
Of course, fans disagree on how big the map should be. Some want a GTA 6 map size roughly twice that of GTA 5, while others feel anything less than four times the size of GTA 5 will be disappointing for a next-gen game. No matter what they choose to do, they won’t please everyone, but one thing fans can agree on is that they want GTA 6’s map to be filled with things to do.

That, of course, brings us to the map design. Map size doesn’t matter unless it’s used to the game’s advantage–a massive map made up of mostly empty space will feel like it has less content compared to a smaller map with greater detail.
The specific layout will depend on the setting, once again. Some fans have even speculated that GTA 6 might feature multiple cities that you can travel between, allowing for both greater size and smaller detailed environments in the same game. One of the most popular ideas is actually that the next Grand Theft Auto game should feature all of the past cities, brought together for a single game. 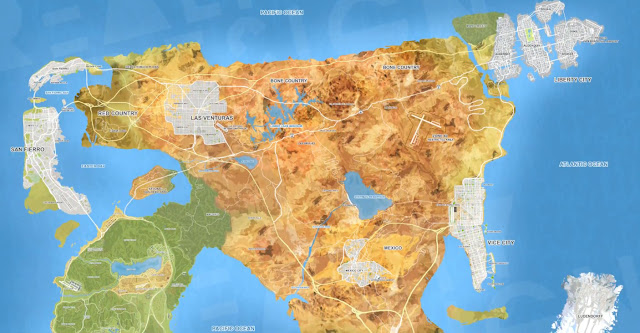 As shown in the detailed map created by a fan on the GTA forums, such a concept would be absolutely massive in scope. For Rockstar to fill such a huge map with meaningful content and detailed areas, GTA 6 would have a staggering amount of content even when compared to similar games.
Yet all of these are still just theories, questions, and ideas. Is there anything actually known about GTA 6’s map?

Officially, nothing is known about GTA 6 at all, let alone its map. However, there have been a number of rumors and supposed leaks over the years about it, some of which are quite recent and fairly credible.

One of the more recent theories is that Rockstar actually already teased the GTA 6 setting and map through GTA 5 itself. This theory came from the “Height of Society” Open Wheel race track for GTA 5 that, when placed on top of a map of North America, roughly lines up with it. In particular, fans felt that Michigan, Florida, and Mexico were highlighted in the map and could be the setting for GTA 6.
These areas align with previous GTA 6 rumors that claim it will be set in Vice City (which is based on Miami), as well as rumors that it might feature a location outside of the United States (which would support the Mexico theory).
Teasing GTA 6 through GTA 5 would not be unheard of, since past GTA games have hinted at the settings for their upcoming games. However, since GTA 5 references numerous cities, it’s difficult to point to one specific thing and say it’s a definite sign of a GTA 6 hint.

Meanwhile, there have been plenty of claims of supposed leaked maps. These come in many forms, usually alongside numerous other supposed leaks as well–details about the setting, story, characters, and so on. Of course, these “leaks” contradict one another.
One recent leak claimed to have a source about how GTA 6 stars a single protagonist and be set in two cities, while another recent leak also claimed to have inside information about how GTA 6 stars four protagonists and takes place across three major cities. In short, every “leak” must be taken with a grain of salt, especially when they don’t have clear sources. If multiple leaks lined up with each other, they might be more credible, but so far there is nothing that makes any particular GTA 6 leaked map stands out as more likely to be real than another.
However, some leaks do have a bit more credibility, and while they can’t all be true, it’s worth keeping them in mind. Fans have even scoured Red Dead Redemption 2 code for anything that might be related to GTA 6.
Eventually, Rockstar will announce GTA 6 and reveal its map. When that happens, we might learn that one of these leaks actually was true… or perhaps that Rockstar’s plans never leaked and will b a surprise to us all.

More and more rumors about GTA 6 Map Leak are gradually appearing in the network, and a new one is dedicated to one of the most interesting aspects of the future game – the open-world map.

One user on Reset Era revealed a new image, which allegedly depicts part of the map of the future. And that is interesting, it is similar to the old leak of the game card. The new photo shows a huge island with the not less big coastal city on it.

At first sight, there is nothing special on the map, however, as it has already been mentioned, it coincides with the leak a few months before, which also reveals various islands, including a bird’s-eye view of this island, and it seems that these two leaks coincide.
All such leaks should be treated with skepticism, so now this image is nothing more than a hearing.

After the network showed the merged card of the expected game Grand Theft Auto VI from Rockstar Games and even confirmed its reliability, the anonymous developer decided to answer about the authenticity of the merged card GTA 6, which indicates the location of the Vice City.

Recently, great popularity in the network has allegedly merged world map Grand Theft Auto 6 from an early prototype game with the place of action in Vice City and consists of several islands. One developer decided to speak out about the merged map and to explain whether it is real or not. The user with the nickname bobert_hoses appeared on Reddit and stated that he has a rich experience in the game industry, in particular, related to the prototypes of game cards. The developer has revealed the whole 10 points on which the merged card of GTA 6 is not authentic and exactly fake.

Why the GTA VI map "leak" is fake. From a game developer’s point of view. from GTA6

In short, we still have no official information about the GTA 6 map, and the GTA 6 map release date probably won’t be until after the game itself is finally announced. Until then, speculation about the location, map size, design, and more will continue.
What do you think the Grand Theft Auto 6 map will be like?