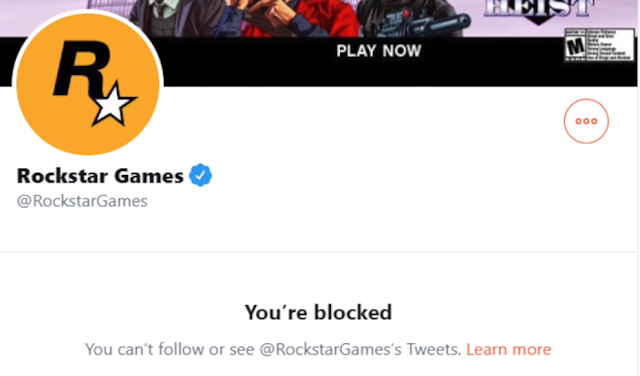 Rockstar getting a little fed up with people asking for Grand Theft Auto 6 on social media like Twitter Instagram and Facebook. It seems like every time Rockstar posts something, the majority of the comments are not really about what they posted more like: where’s GTA 6 is coming out?  They are random comments that led  Rockstar is getting fed up because one person posted on the GTA 6 speculation thread, that they actually got blocked by Rockstar on Twitter.

Presumably, this person was just constantly asking them non- sense questions, or maybe this purser was always wondering when that game was gonna be released so especially after the recent Kotaku article how they basically mentioned that rockstars next game is gonna be about GTA 6 and it might end up being smaller because rockstar has a bad history of you know really forcing their employees to crunch and work really hard towards the end of a game coming out, so I don’t know maybe they’re feeling the heat on this a little bit and if that is the case they’re not holding back at all when it comes to blocking people on social media.


so just be careful if you don’t want Rockstar to block you don’t consistently spam them with: know where’s GTA 6? and yelling at them when they make a post that isn’t about GTA 6 so just keep that in mind when you’re interacting with Rockstar on social media and honestly, this should be a good example of social media etiquette as well just because you are anonymous on the internet, doesn’t mean you can just spout whatever nonsense you want people to have the right to block you and apparently so does Rockstar as well.